Deep Mind is a company that got bought by Google at the beginning of 2014 for the usual gazillion dollars that everything seems to get bought by nowadays. They published a paper not long before that showing how they combined a deepish convolutional neural network with Q-learning to get computers to learn to play quite a few Atari games solely from the screen pixels and the score. This is something I’ve tried to do before so I thought it was very exciting news and that I should try to replicate it.

By the way, if you haven’t seen any of the demo videos showing the results, or haven’t read the paper,  go have a look. The paper is “Playing Atari with Deep Reinforcement Learning” by Volodymyr Mnih, Koray Kavukcuoglu, David Silver, Alex Graves, Ioannis Antonoglou, Daan Wierstra and Martin Riedmiller . Get it from http://arxiv.org/abs/1312.5602 The rest of the post will make much more sense if you have read through the paper.

A year passed and I still hadn’t attempted any replication. This was quite lucky since Nathan Sprague did, and some of the Theano code he needed to write looks beyond me. His code is here: https://github.com/spragunr/deep_q_rl (which I’ll call the Sprague code).

There are probably a few differences in the details between the implementations by Prof Sprague and Deep Mind. The ones that I noticed are the following:

I got some time to download the code and test it a bit over the new year’s break and it does brilliantly,  even though not quite as brilliantly as what’s described in the paper. Deep Mind’s paper claim they got an average score of 168 on breakout and 1705 on seaquest while the Sprague code topped out at about 50 for breakout and didn’t seem to learn on seaquest. I haven’t tried it on any other games yet.

Each 100-episode run takes a bit over 24 hours on my beastly new GTX 970, so there haven’t been too many experiments yet. I did make quite a few changes to the code, but mostly to make it easier to use and other non-learning-related changes.

The few changes that I’ve made that could affect the learning are the following:

While I still haven’t seen any learning on seaquest, the program got to an average score of slightly over 100 in some of the testing epochs, while regularly averaging over 70. Here is its current masterpiece, a 331 produced after about 18 hours of training:

Here is the more accurate picture of its results, plotting epoch vs score, and the Q-value on a test set, similar to what’s shown on page 5 of the paper: 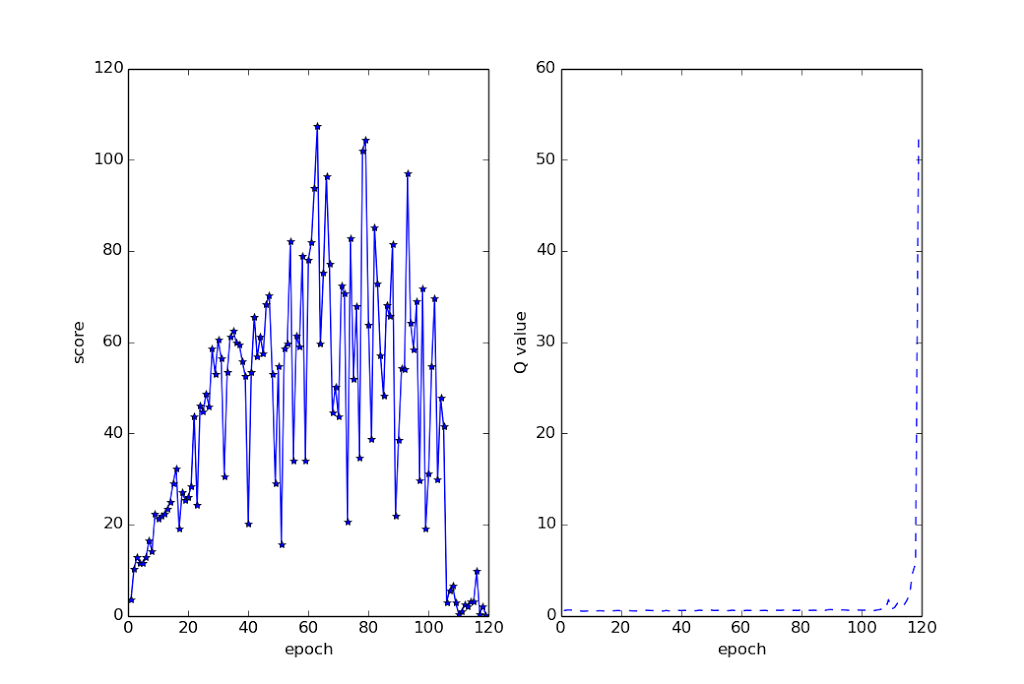 The score plotted for an epoch is the result of a testing round that is done after that epoch. The testing runs for 10000 frames. That’s about eight or nine games when it’s doing well. Note the collapse of the score around epoch 103 or so, with the Q-value going whacked shortly after that. That, I think, is the Q-learning diverging.  If you look in the paper, their Q-value goes smoothly up. This one never does, not even before the divergence.

My fork is at https://github.com/alito/deep_q_rl . I will probably keep tweaking with it. I expect the code to learn nicely on pong, but I’m not sure on other games. Here are some ideas for it:

11 thoughts on “Replicating the Atari-playing paper from Deep Mind”